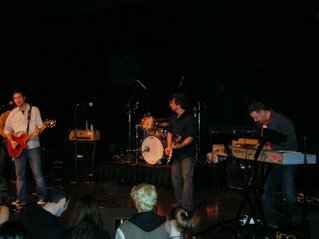 It takes more than shortsighted music biz executives to keep a great band down. Nine Days took the stage at the Boulton Center for the Performing Arts in Bayshore to huge applause. They deserve it. Having recorded a very successful CD for SONY, the label subsequently squashed their follow-up release. Nine Days believed in their music and have soldiered on without the major label. They played an energetic set at the Boulton to an enthusiastic hometown crowd.

"If I Am", from their hit CD, "The Madding Crowd", was their first song of the night. Guitarist/singer John Hampson connected with the audience immediately and got everyone on their feet by reminding, "You may be in a theater but you're not at a movie, this is a rock concert! You can stand up! You can even dance if you want to." Most of the audience was then standing throughout the set and I did see a few people dancing in the aisles. Despite a case of bronchitis John Hampson’s voice sounded strong and he had great rapport with the audience between songs.

Nine Days played two other songs from that hit CD, "Bob Dylan", and their most famous song, "Absolutely (Story of a Girl)". Faced with a girl who's drowning in problems and self-doubt, Nine Days fashion a life preserver out of humor and persistent optimism. One reason for Nine Days’ success is the strong writing team of John Hampson and Brian Desveaux. The two guitarists write songs that are lyrically and musically well crafted.

The band played a few new songs from their latest independent release, "Slow Motion Life (part one)". Two of these, "A Girl in " and "New Shoes", are great examples of what makes Nine Days so memorable. Dynamic contrast within the context of the song, intelligent lyrics, musical hooks, and great grooves distinguish these songs. Most importantly, this band doesn't sound like every other band. In addition to their songwriting skills both singers have distinct vocal personalities. Their vocal harmonies are also exceptional. I've heard enough over-emoting gravelly-voiced 'singers' in today's mainstream rock bands to last a lifetime.

As the night progressed, John switched back and forth between acoustic and electric guitar, and Brian played a few different electrics as well. In this band the song dictates the instrument. Drummer Vinnie Tattanelli and bassist Nick Dimichino provided a rock-solid rhythm team and keyboardist Jeremy Dean added additional colors to the songs. These five musicians work well together to create their edgy melodic rock sound.

The song "This Music" from their 1996 CD "Monday Songs" contains the line "It's hard here on , to be an artist and speak your mind". That may be true, but it’s good to know that Nine Days are still out there carrying on writing and playing their excellent music. Go to ninedaysmusic.com to pick up a copy of their new CD.

The sound in the was excellent. This is a great LI concert hall. I'd like to see more shows here featuring LI bands. "Grieving for Grace", a young band, started things off. The band was tight, they played well-written songs, and I liked the interplay between the two guitars. "Back to Me" and "North Star" were two standout songs from their set.